All States Ag Parts, one of the nation's leading used, new and rebuilt ag parts suppliers, announced they will be opening their new retail location in De Soto, IA on January 2, 2012. All States Ag Parts now operates 8 locations throughout the midwest supplying farmers, repair shops and equipment dealers with new, used and rebuilt tractor parts and combine parts.

"Our new facility greatly expands the parts selection available. We have almost 10 times the warehouse space we previously had and are stocking thousands of commonly needed parts. These parts are available for same day pick-up, making it very convenient for area farmers", said Chad Bagby, New Parts Division Manager for All States Ag Parts.

"In addition to the thousands of parts we have in stock, we have over 100,000 new after-market parts that are available with 1 to 2 day delivery", Bagby said. "The new distribution center in De Soto is already fully stocked and has been shipping orders world-wide since August. We're excited about being able to open the retail side of business and make the parts available to local farmers too".

De Soto, IA is located approximately 15 miles west of the Des Moines metro area along Interstate 80. The new facility is an expansion and relocation of the operations that were previously handled in Urbandale, IA. In addition to a retail sales area and parts warehouse, the De Soto facility is also the company's headquarters for internet and catalog sales. The relocation brings a total of 20 jobs to De Soto.

"In De Soto we will have a staff of 7 full-time parts experts handling our internet and catalog sales. This has been a tremendous growth area for our company. We ship parts throughout the world", said Jeff Griggs, chief operations officer for All States Ag Parts. In addition to warehouse and catalog sales staff, we have corporate marketing, purchasing, IT and operations staff located in De Soto".

"Our new location is literally a stone's throw from I-80", said Terry Burkart, marketing director for All States Ag Parts, "we have great visibility and easy access for farmers and will be providing them with a tremendous selection of parts not previously available in central Iowa. With our new buildings in De Soto, we have over 4,000 sq. ft of office and showroom space and 18,000 sq. ft. of warehouse space. We also have an additional 8 acres of land for future growth".

"One area for immediate expansion in De Soto is the addition of a rebuild shop for carburetors, distributors and other small parts", said Griggs.

The new rebuild shop will combine with All States Ag Parts other rebuilding operations to offer a full complement of rebuilt ag parts including cylinder heads, crankshafts, transmissions, hydraulic pumps, scv's, clutches, water pumps, straw choppers, final drives and more. Each of these parts is covered by an industry-leading 1-year warranty and is rebuilt by trained technicians.

"A salvage yard is not currently in the plans for De Soto", said John Dyke, the owner of All States Ag Parts, "but our seven other locations each include salvage yards ranging in size up to 50 acres. The De Soto operation will have quick-access to the used parts from these yards with most parts available in a day or two".

All States Ag Parts' salvage yards provide an economical and environmentally friendly means of replacing parts. All States stocks used parts for all makes and models of tractors, combines, hay equipment, planters, skid steers and more. Each used part is thoroughly inspected and comes with a 1-year warranty.

The new Desoto, Ia store can be reached by calling 866-609-1260. The showroom is located at 10 Ellefson Drive, just north of Interstate 80. All States Ag Parts can be found on the internet at www.TractorPartsASAP.com

Popular posts from this blog

Our After-Market Concaves are better than the OEM's!

August 23, 2011 ROTARY CONCAVES Although a rotary combine uses a rotor instead of a cylinder and even if the concaves do look a bit different, the concaves on conventional and rotary combines both have to perform the same two functions--threshing and separating.   To allow for threshing and separation in different crops you can use wide wire or narrow wire concaves or any combination. Round bar concaves are also available.   All States Ag Parts carries precison bored concaves so they fit better and are easier to properly adjust. The wire holes are drilled with state of the art, computer controlled, multiple head drills. This ensures the precision alignment of holes, and a snug wire fit. With an All States Ag Parts precision built concave there's no wire-to-hole gap to trap straw.  Rotary combines are achieving very high capacity figures. Along with higher capacities, rotary combines tend to have higher wear factors. To help control maintenan
Read more 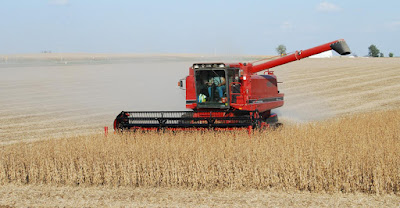 Fall harvest is around the corner. Before you hit the field, give your combine a once-over with this 12-point checklist. Clean the machine of dust and dirt for better operation and to help spot wear and potential problems. Attach headers to combine and make sure they are operational, checking height and contour controls. On the grain table header, inspect sickle blades and guards, inspect teeth in augers and reel. On the corn head, inspect gathering chains and sprockets, adjust the width of stripper plates. Check and adjust drive chains.  Remember:  Row unit gearboxes operate as mini transmissions and need to be checked once a year. Refill with grease or oil depending on age and brand of corn head. Check all belts for wear and replace as needed. Check all chains and bearings for wear; replace chains that can’t be adjusted or tensioned correctly. For axial combines, inspect rotor and concave, checking wires for damage and bars for wear. Check unloading system auger. If edges
Read more 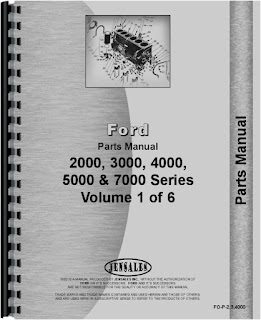 Which Tractor Shop Manual Do I Need? There are several types and brands of manuals for servicing, operating and parts referencing that all come under the general title of “shop manuals”. When acquiring a manual it’s necessary to know which manual you need for your purpose. Here’s a quick guide to the types of manuals sold by All States Ag Parts   Parts Manuals High Quality Reproductions of the Original Factory Version Parts manuals have expanded views of each part on the tractor or piece of equipment. Numbered pictures give you great detail on assembly and disassembly. One purpose of a parts manual is to provide you with pictures labeled with part numbers. These part numbers will help you avoid costly and time consuming errors when ordering parts.      A parts manual can also help in the assembly and disassembly of components. A service manual, after telling you how to disassemble a part, in detail, will simply say “reassemble”. If you have your PTO in the wash tank i
Read more